Origin
Netherlands. Date of publication of the original valid standard : 26, 03, 1992

Utilization
The Netherlands Schapendoes is a herding dog which was used for herding flocks of sheep and which is still used in the same capacity today. As pasture for sheep is situated mainly in quiet, lonely areas of the country, it is necessary for the Schapendoes to be equipped with great endurance, mobility and speed. A great facility for jumping is essential, as well as intelligence and the ability to act on his own. He has to be a true herding dog in character, body and soul. 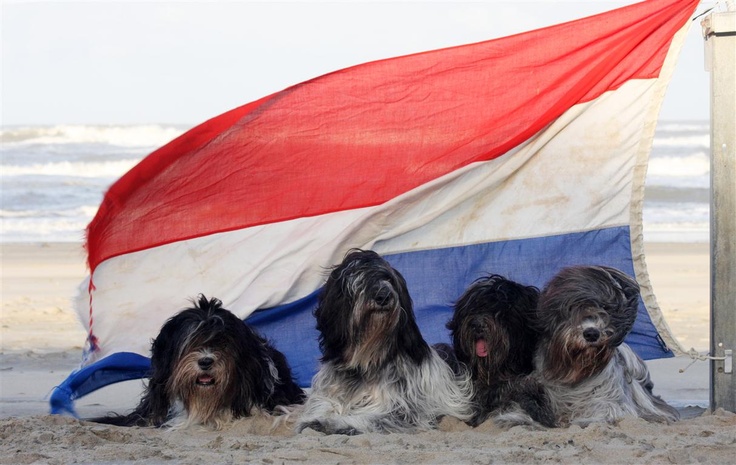 Brief Historical Summary
The Schapendoes is the shaggy sheep dog of Holland. With the rough, dense, long coat and drop ears, the breed is physically similar to the Beardie, Puli, Nizinny and other European varieties. Root stock is believed to be the same as that of Briard, Bearded Colie and Bergamasco.

Although the Dutch Sheepdogs have been in existence for many centuries, they are not well known. They did not attract the attention of royalty but remained a dog of the common people; therefore they were rarely immortalized in art or literature. More recently, small flocks of sheep in Holland were subsidized by the government as “show” for tourists, presenting a pretty picture of green pastures dotted with white sheep. The native sheep dogs did not reap the same government benefits as their charges. Due to a lack of interest in the native breed and the importation of English Border Collies, the Schapendoes dwindled into small numbers prior to the Second world War.

Dutch inspector and publicist P.M.C. Toepoel discussed the dog’s characteristics with others who were interested in the breed and became the driving force behind preserving the Schapendoes. Following his lead, a few enthusiastic Dutch owners became dedicated to resurrecting the breed and, in the 1940’s, the first specimens were shown. Their cheerful temperaments, coupled with a rough-and-tumble appeal, stirred interest in the Schapendoes. Growth in numbers has been tempered with caution by wise breeders. Even large kennels only keep four or five dogs with a few pups, and waiting lists are long. The breed is known in several European countries.

The weather-resistant coats serve them in good stead in inclement weather, although like many modern dogs, they much prefer being indoors with their people to being kept outdors. Thoroughly brushing the hair to the roots every two weeks is recommended for adults, with puppies requiring a bit more care. The finished product should appear clean, but a bit unkempt. Their feet are lighter in color than the body coat. The tail is all-expressive, carried high (but not curled over the back) when trotting or in his usual gallop; while jumping it serves as a helm. Although slightly elevated at attention, the tail is carrid low when at rest.

The sheepdogs are still worked in their native land, firmly nudging the animals with their noses and shoulders. They are lively, courageous and intelligent, although a bit high-strung. Daily running expends energy and aids in keeping them fit. Their tireless playfulness makes the Schapendoes an ideal children’s companion and, since they are alert without aggression, they also serve as watchdogs. Their herding instincts, like many of their counterparts, are such that they will herd anything-even children, if necessary.

Owners say they are sweet, merry buddies, a “flower for the future”. They are meant to look like a shaggy dog, not plush and sleek like a Tibetan Terrier or to be only a decoration.

Most of current Schapendoes come from “Reeuwijk’s” Kennel of Mr Backx-Benninck and his wife.

His arrival in France is very recent (1985) and the first French litter borned in 1987, at the kennel of J. et D. Mellet-Coemades.